State-Record Salmon and Sheepshead Caught (and Speared) in New Jersey

State-Record Salmon and Sheepshead Caught (and Speared) in New Jersey 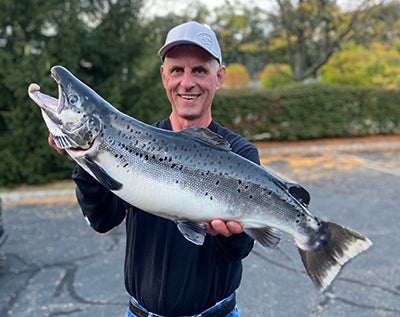 The New Jersey Department of Environmental Protection (NJDEP) Division of Fish and Wildlife announced Oct. 14, 2021, that two state saltwater fish records were caught in September and have been accepted by the state.

According to the NJDEP, Joe Satkowski of Hampton, N.J., broke the prior state record for landlocked salmon with a hefty and beautifully-marked fish weighing 8 pounds, 10 ounces. Statkowski used a homemade jig while fishing from his boat on Merrill Creek Reservoir on Sept. 30, to eclipse the previous landlocked salmon record by five ounces. The fish measured 26 inches in length with a 16.25-inch girth.

Landlocked salmon generally are the non-migratory freshwater version of anadromous Atlantic salmon, and are known for their fight.

The second fish approved by the NJDEP as a state record was taken Sept. 20, by Russ Griffin of Manahawkin, N.J., while spearfishing off Long Beach Island, N.J., The sheepshead weighed 12 pounds, 8 ounces, measuring 26 inches long and 22.5 inches at its girth.

The IGFA all-tackle sheepshead record taken by hook and line came from New Orleans in April 1982. It weighed 21 pounds, 4 ounces.

Previous Article
Missouri Angler Catches 36-Pound Piebald Catfish Using Asian Carp for Bait
Next Article
Florida Anglers Are Asking For a Goliath Grouper Season, But it May Be Too Late

Florida Anglers Are Asking For a Goliath Grouper Season, But it May Be Too Late
vapedeal November 25, 2021
Outdoorlife.fun©All rights reservd.